I cannot say enough how glad I am to be home! I couldn’t even sleep in the first morning back as I was too relieved and just wanted to take it all in. How wonderful it is to be reunited as a family and close to the ones we love.

The trip home was pretty difficult. Traveling with a toddler across the globe would be hard enough- but there are certain factors that made our trip even more challenging. For example, there are times when Ruth would get upset and refuse to let me comfort her. That happened at the beginning of our 9 hour flight to Minneapolis from Amsterdam. She had been woken up as we were boarding, already a step in the wrong direction, and was having to sit in her own seat with a seat belt for take off. She cried/screamed for the entire boarding process, which was about 20 minutes but seemed like a lifetime. The same thing happened two more times that flight, and one time she rejected me and allowed a perfect (but God-sent) stranger to hold her and comfort her. I was feeling extremely low at that point, and was afraid that Ruth would not want to come back to me after being with the lady for a few minutes- and, in my humanness, also not wanting her myself in that moment. But she eventually did choose to come back.

There is so much about adoption that isn’t broadcast to the public- but incidents like this aren’t uncommon at all. I may have actually encountered an angel on that airplane, named Emma. Nobody else would have been as understanding as she was, and she just so happened to be the only other person sitting in our row. She was traveling home after being in Uganda as a midwife for a long time. There was also a stewardess who had adopted a son from Africa, and even though it was a long time ago, she still understood and offered me encouraging words before take off. All that being said, if you are ever in a public place and encounter a hysterical child and parent- a little kindness goes a long way. I know every other person on that airplane was judging me as a mother to this new daughter I still hadn’t figured out. I saw the eyes roll and glances exchanged, but the kindness of two people got us through that flight.

Now we are home and settling in. I would like to update on how Ruth is acclimating to her forever family and new life!

She is doing remarkably well. She is so resilient. She also has a super special bond with Allen, which undoubtedly makes her adjustment that much easier! She is having no issues with the foods we eat, she likes almost everything. She is even starting to sleep through the night on her own. The first few nights Shane was making trips in to calm her anytime she woke up upset, but those times have become few. When it’s time for her nap or bedtime, she allows us to just tuck her in instead of staying in the room until she’s asleep. This was a huge step we never expected to be taken so quickly. I’m convinced her better sleeping is indicative of a growing comfort in the family and her new surroundings.

We have a dog, outside only, and a cat, indoor only. She was terrified of both at first- but now she will touch Pepper, our cat. And she remains very interested in Coulson, our dog, but still from a distance. The car seat we were sure was going to be a problem. She was used to being free to move around as she pleased in the car thanks to non-existent traffic laws regarding children restraints in Nigeria. But that is also a non-issue, I’m sure, thanks to Allen! 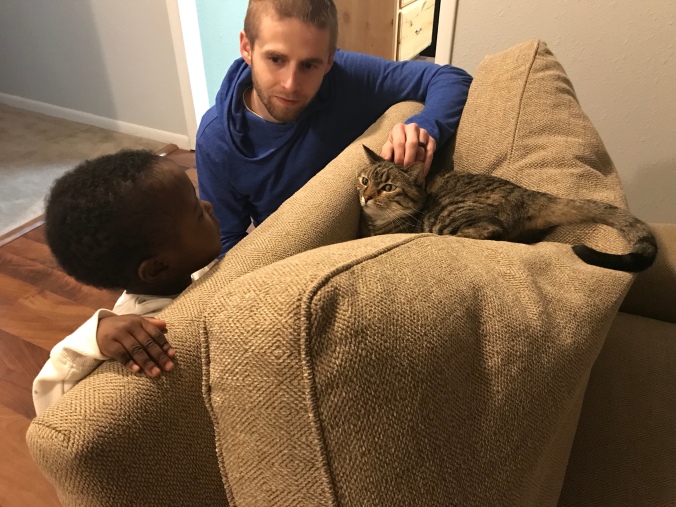 We even ventured to church yesterday, and everything went so smoothly! She enjoyed her class and teachers and all the activities they did. And there weren’t too many kids, so our fears of her getting the flu were diminished quite a bit. I know Allen is going to be ready to go back to a routine of “school” soon, and we are hopeful that Ruth will be able to join him. She seems to thrive on routine and interaction with other kids. Which makes sense, as being around a lot of kids is what she’s used to. We believe that her speech is also improving. She more she interacts with others the better she is able to communicate. We are so thankful that she was not accustomed to another language- that would be a very difficult barrier to overcome when thrown in with everything else going on in a newly adopted child/family’s adjustment. And, along with the routine and social interaction, Ruth will likely learn quickly in an educational environment tailored to her age group. She is very smart, that is easy to see, but cooperate learning would probably be an amazing help to her. But until we get a physician’s opinion on her general health and what would be best for her to be exposed to, she and Allen both will just be playing at home. 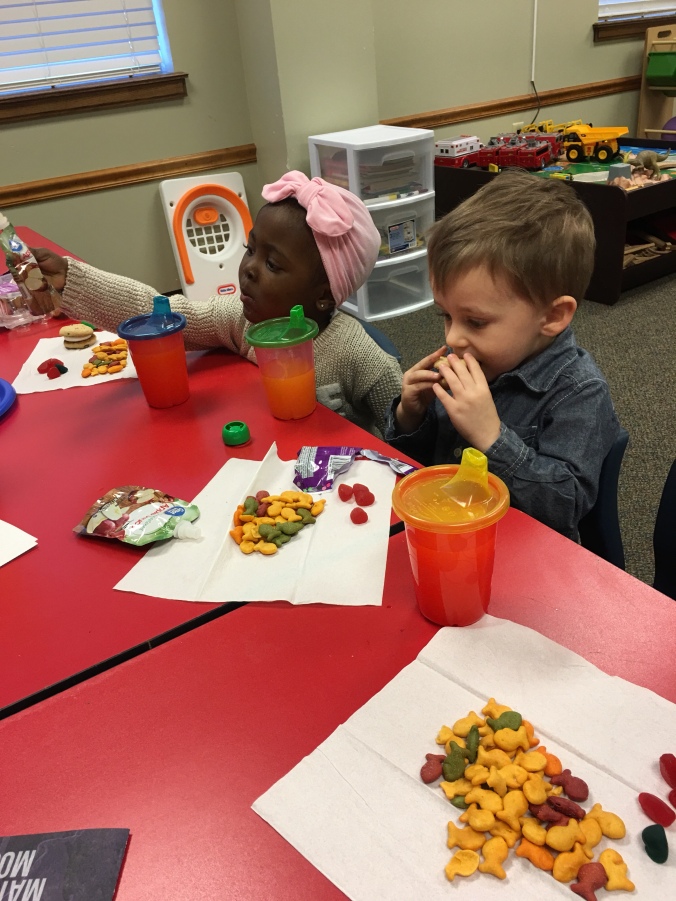 Her appointment is this Friday at South Tulsa Pediatrics. The physician she is seeing is familiar with a few adopted children from Africa, so that is a comfort to us. We are hoping and praying that she is in great health with nothing to be concerned about.

The other spectrum of the adjustment is how Shane, Allen and I are doing. That is one thing we weren’t quite prepared for in the educational material we went through before placement. There are plenty of resources on how to help a child adjust to their new life and family, but there are very few that share what the parents and siblings might encounter during the adjustment. After all, it is an adjustment for everyone! 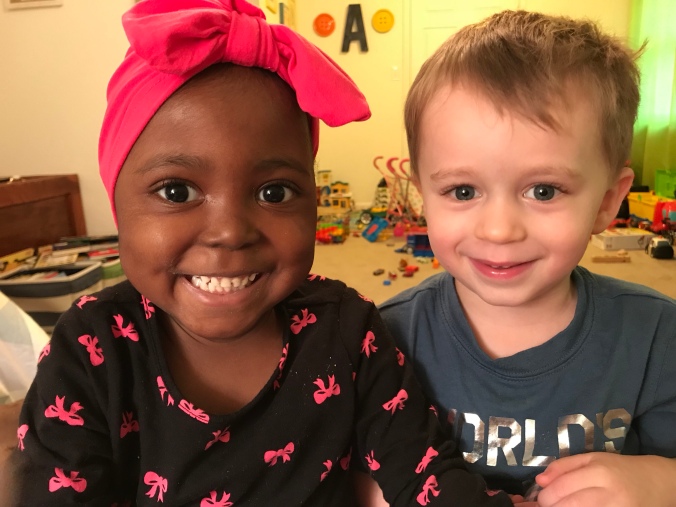 Thankfully Allen is doing very well- the only issues we are running into are sharing related, and that is totally expected. He truly loves having his sister around, and we love how quickly they have grown to love each other! The attachment for Shane and I hasn’t been so immediate. We are giving ourselves grace as we slowly, but surely, begin to form affection for Ruth. This is another seldom talked about issue concerning adoption, but the feelings associated with love aren’t always present in the beginning of a parent/child relationship. Shane wrote about this extensively in his guest blog about a year ago. I am finding myself very thankful for his experience in choosing to love even when the feelings just aren’t there. His encouragement and wisdom in this matter is proving to be the greatest help I need, because I am struggling to feel the love for Ruth that was present prior to the adoption.

It’s so easy to romanticize an ideal, and Ruth was just that before we physically had her: an ideal, with an adorable, yet sad, face and big eyes that I was sure I could make sparkle. But Ruth has issues that will take time to unpack and figure out, if that even happens fully at all. She has rejected us. And although we are the adults with much more emotional and rational understanding of the situation, we are also human. The affectionate feelings that are associated with love are not as present as I just knew they would be, but I’m not worried about it. I know that God working through us in time will take care of that. Shane has been a very present rock of patience amidst my impatience and frustration. He is assuring and loving and everything we all need in this time of finding our new normal. He is truly an amazing father and husband, and none of this would have been possible without him.

All that being said, I plan to continue writing about our life as a family. I’m sure the updates won’t come as often as they did while we were in Nigeria, but I’ll try to do better than just a post or two a month! God is truly growing us through our family’s adoption like he has never grown us before. It’s not a comfortable process, and a lot of the time I find myself wishing it would all just stop, but as with every growing experience God leads us through, we hope to look more like Jesus at the end.

4 thoughts on “One Week at Home-sweet-home!”