Being fully immersed into the world of adoption is quite… overwhelming. This is what our family has been experiencing for almost a year now, and still the most fascinating aspect is when I get to talk to and hear from adopted individuals first hand. Maybe it’s because I am eager to hear the range of opinions Ruth could have as an older child adult. I certainly want to learn what is best for her, as raising her will be (and already is) dramatically different from raising Allen. Not only will Ruth face unique challenges and situations as an adopted child, but she will also face more difficult challenges being a different race than her family.

In an attempt to just let some voices have a platform to speak truthfully and anonymously, I reached out to a large group of adopted individuals. Their ages ranged from early teens to late sixties. Their ethnicities were varied, as were their adoption experiences. Some were adopted within their biological family, some from infancy, some from the foster care system and others internationally. I want my daughters to be heard and respected for their life experiences, and so I thought I would give others that same chance. I won’t feign a staggering readership here, but sometimes, being authentically heard by one person is just as good as a large crowd.

I asked these individuals several questions, then asked if there was anything they wished to share that the previous questions hadn’t touched on. These stories are beautiful, some are heartbreaking (because adoption is not always a happy ending for the adopted) but all are raw and real in their responses.

1. What do you like about being adopted?
This question had relatively similar answers. Many said that they loved the life, love and security that their forever family afforded them. Individuals coming from foster care and international adoption backgrounds say that their life now is drastically better than what their life was or could have been. A few others said that adoption made the Gospel come alive for them, even at a young age. One woman in particular wrote,
“I love how it enriches my testimony, and the way that I have a vivid reminder and understanding of what it means to be an adopted daughter of Christ.”

2. What do you dislike about being adopted?
This question had far more varied responses. Some individuals wished their could know more about their biological family, or even meet biological relatives they know exist but don’t actually know. Some wish that filling our medical histories weren’t so blank, so to speak. Many disliked the disconnect with explaining they are adopted and then receiving responses like, “Oh, so you aren’t actually related to your family,” etc.. Some individuals received bullying and unwanted attention just for being adopted. One response was simply “N/A’. To this person, there were no dislikes even applicable to his life as an adopted family member. One response in particular to this question really made an impact because of it’s selfless nature. When asked what this person disliked about adoption, she wrote,”That my grandparents have never gotten to be GRANDPARENTS, they had to be parents when I was growing. While there are other grand kids, they all live at least 8 hours away, it also would not have been fair for them to have other grand-kids over being GRANDPARENTS to them and PARENTS to me. I hated having to constantly tell everyone, no they aren’t my “mom” and “dad” they are my “Mimi” and “Pa”.

Other responses were more wounding. Some individuals developed deep hurts as a result of their adoption and treatment by their family. Other issues, such as a negative self-image as a result of being “unwanted” by biological family are more common than anyone would like to know. While adoption can be a beautiful, healing experience, sometimes it is not.

3. How has adoption given you a unique worldview?
This question was probably one that I expected certain responses and didn’t receive many of those at all- so it was very interesting, even if I don’t fully understand the breadth of the unexpected responses. I suppose what I expected to hear from adopted individuals is that being adopted made them more aware of the Gospel in their everyday life, or something of the sort. Increases empathy for those enduring suffering or something of the like. Here is a few quotes that are reflective of the majority who answered the question, because a decent number did not. One young lady, adtoped trans-racially and internationally said, “It gives me, what I feel as a greater appreciation for those who come from different backgrounds, we are all different in our own unique ways, and we all have story, sometimes we just come to it through a different way. ” Another individual, adopted from the foster care system, says that adoption has given him the perspective that “background doesn’t matter, anything is possible.” Still another, a unique circumstance of this individual being adopted and also adopting herself, says, “Not so much from my personal adoption, but through the adoption of our daughter. After lots of research and traveling to other countries, God opened my eyes to children are children no matter where they live. They don’t get to choose where they are born and how they live, they are just products of their birth parents circumstances and choices.”

And still another answer has rocked me to my core. A young man, who had lived several years in an orphanage in a developing country, explained that adoption has effected more than his worldview- it has permanently influenced his view of God. He explained that he had seen many, many of his peers be adopted by families from all over the world. The one common factor he derived from seeing this happen is that the families choosing adoption were all loving. He went on to say, “I know we all are God’s children but it’s much harder to think that when you don’t have a family here in the earth.” I was unable to read the rest of his responses before fully absorbing the enormity of this statement. He was taught about Jesus and the Gospel in the orphanage, he knew who God was. But because he did not have a forever family, loving him and choosing him, he had a hard time believing the truth: that he was loved and wanted by God.

What a heartbreaking reality for those children, that they cannot fully understand the Gospel because of circumstances they did not choose. And what a convicting conclusion: that the most effective way to spread the Gospel to children who are without families, no matter where they live, is not to send them a team of volunteers to improve their living conditions or donate money for their education or even send them Christmas presents. The most effective way to insure they understand the Gospel is to BE the Gospel to them. Adopt them. Foster them. Be intimately involved in their life, in whatever way they need most. To think that Ruth and Cynthia could have grown up in an orphanage, hearing about Jesus and who he is  and even how much he loves them for years, but never believing it because they were never chosen like their friends were, breaks my heart in ways I never thought possible. And it is happening right now, all over the world, including the town you live in. 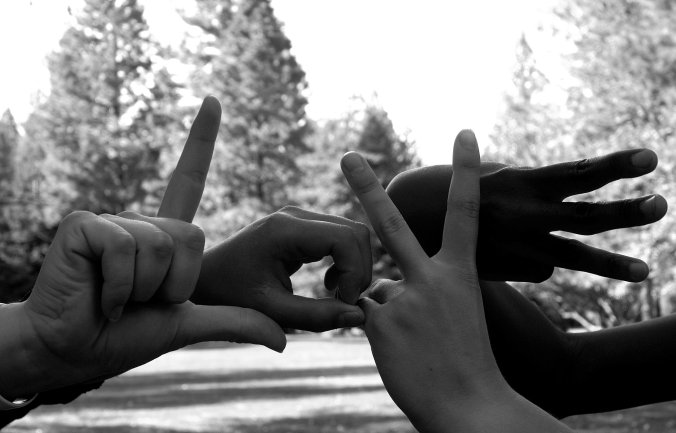 There’s more questions and responses to address, but I truly want to represent these amazing people well. With the craziness that is our life right now, breaking up this project into smaller pieces seems to be the most effective way to give their voices the volume they deserve. I’ll continue to work on this project, as I am being blessed by it and praying it blesses you, too.